Faithful are the wounds of a friend


Recently, while preaching through the book of Zechariah, I was struck by a passage in the thirteenth chapter in which the prophet spoke of a time when the Lord would so work in and among his people that they would no longer tolerate the presence of idols or the prophets who served them.  So adamant would they be in this that even the family members of the false prophets would rebuke and discipline them.  What’s more, the false prophets themselves would come to be grateful for this.

Every prophet will be ashamed of his vision when he prophesies.  He will not put on a hairy cloak in order to deceive, but he will say, “I am no prophet, I am a worker of the soil…” And if one asks him, “What are these wounds on your back?” he will say, “The wounds I received in the house of my friends” (Zech. 13:4-6).

The genuineness of their repentance would be proven by the fact that they would regard as friends, those who had reproved them and rescued them from their error.

The same sentiment is expressed in Proverbs, “Faithful are the wounds of a friend” (Prov. 27:6).  The meaning is that a faithful friend will not allow his friend to persist in his error without seeking to correct him.  This ought always to be done in a spirit of gentleness, of course (Gal. 6:1; 2 Tim. 2:25), but in the world’s wisdom, no matter how loving, kind, and well-intentioned the correction might be, this is not an act of friendship, but of enmity; it is not love, but hate.   In the world’s wisdom, it’s the one who applauds and encourages his neighbor in his sinful ways who is thought to be a friend.  The truth is that in such a case he is acting the part of an enemy, no matter how friendly he thinks he’s being.

Let a righteous man strike me—it is a kindness;
let him rebuke me—it is oil for my head;
let not my head refuse it (Ps. 141:5)

“Let a righteous man correct me – it is a kindness.”  This is a mark of wisdom, to regard righteousness as more important than comfort, and to esteem as a friend one who risks being considered rude and offensive by delivering reproof. 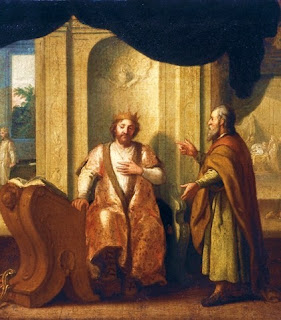 Perhaps David had the prophet Nathan in mind when he wrote this.  Nathan had given David a very sharp and well-deserved rebuke on account of his sin with Bathsheba, a rebuke that brought him to a heart-felt repentance and brokenness before God, resulting in his restoration (see 2 Sam. 12).

However difficult it is to deliver such a stroke – and however painful it is to receive it – it is nevertheless an act of kindness for which we should be grateful.  The author of Hebrews puts it this way:

For the moment all discipline seems painful rather than pleasant, but later it yields the peaceful fruit of righteousness to those who have been trained by it (Heb. 12:11)

By Doug Enick - January 18, 2011
Why did Jesus tell the people he healed not to tell anyone?

This is a curious thing, isn’t it? Especially in light of the fact that Jesus has commissioned us to make him known. We find that on several occasions during his earthly ministry that Jesus told the people whom he healed not to let anyone know about it.

This was not always the case, however. For instance, when Jesus delivered the Gerasene demoniac from the power of Satan, and the man “begged that he might be with him… Jesus sent him away, saying, ‘Return to your home, and declare how much God has done for you’” (Lk. 8:38-39). So here’s one time, at least, when Jesus told a man to tell everyone.

But on most other occasions he told people not to tell. In Matthew 9 we read about two blind men whom Jesus healed. It says,
And their eyes were opened. And Jesus sternly warned them, “See that no one knows about it” (Matt 9:30).In the first chapter of Mark we read of a leper who was healed; and it says,
Jesus sternly charged him and sen…
Read more

By Doug Enick - September 09, 2010
What does Jesus mean when he says in Matthew 5:23-24, “If you are offering your gift at the altar and there remember that your brother has something against you, leave your gift there before the altar and go. First be reconciled to your brother, and then come and offer your gift”?

He’s referring to bringing a sacrifice or an offering to the temple to present as a gift to God as an act of worship.

And he says that if while you are doing this you remember that someone has something against you, you must first go and make it right, or God will not find the act of worship acceptable.

Now, I suppose the question largely has to do with what Jesus means when he speaks of someone “having something against you”.

We should be very clear about this. He doesn’t mean that your worship is unacceptable to God just because your neighbor is upset with you, regardless of why he is upset. He means that your neighbor has a legitimate grievance against you because you have sinned against him. You have br…
Read more

Introduction In my previous post we considered the underlying assumptions of the social justice movement.  In this one, we will consider its Marxist origins.  My contention is that social justice is best understood as a euphemism for what is variously called Neo-, Western, or Cultural Marxism.
It’s called Neo-Marxism to distinguish it from Marxism in its original form, Western Marxism because of its adaptation to western societies, and Cultural Marxism because it takes the principle of class struggle in traditional Marxist theory and applies it to other social struggles in the broader culture.  This last term is perhaps the most helpfully descriptive.  But to understand Cultural Marxism, we must first understand Classical Marxism.
Classical Marxism Classical Marxism is the name given to the social, political, and economic thought of Karl Marx (1818-1883).  Marx and his associate, Friedrich Engels, were the co-authors of the Communist Manifesto (1848).  They, along with their immediate i…
Read more