Showing posts from April, 2018
Show all

Unchanging Witness: The Consistent Christian Teaching on Homosexuality in Scripture and Tradition 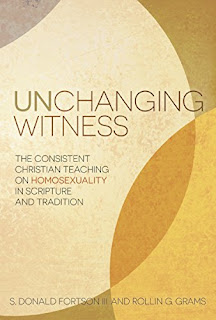 An oxymoron is a contradiction of terms. Examples include: thunderous silence, cruel kindness, and make haste slowly. Some oxymorons originate accidentally; others intentionally, to produce a startling rhetorical effect. Many are humorous. Some are deceiving ( genuine imitation ). Most only seem contradictory, but further reflection reveals a deeper truth. Others are real contradictions. To this latter category belongs the label “gay Christian,” which is not only deceiving, but dangerous. Gay activists have been rather successful in their effort to normalize homosexuality in the wider culture, winning their most significant battle to date in the landmark Obergefell decision. [1] They have also had a surprising degree of success in convincing Christians that same-sex sexual relationships meet with the same divine approval as those between a husband and wife. S. Donald Fortson III and Rolling G. Grams have convincingly rebutted these activists in their recent book, Unch
Post a Comment
Read more
More posts