Showing posts from January, 2009
Show all

Promptly and Sincerely in the Service of God

By Doug Enick - January 29, 2009
Calvin's personal motto was Cor meum tibi offero domine prompte et sincere , "I offer you my heart, Lord, promptly and sincerely." His emblem featured a heart held in a hand and presented to God. Everything in his life testifies that this was no empty platitude, but the rule by which he lived.
Post a Comment
Read more

By Doug Enick - January 29, 2009
This is one very talented young man . And while you're at it, you really need to check this video out, too, by the same guy.
Post a Comment
Read more

By Doug Enick - January 27, 2009
As I was reading Calvin's commentary on Genesis 1 as a part of my Torah study, I was reminded of the Creation/Evolution flap (actually Evolution/Intelligent Design flap) in Pratt several years ago. It just so happened that at the same time the Kansas State School Board passed changes to the Science standards, de-emphasizing the theory of evolution, the Pratt School Board was approached by a group of patrons urging the board to allow the teaching of Intelligent Design. Well, our little community made national news, don't you know! And our humble little Pratt Tribune received a letter to the editor from Michael Ruse, world famous philosopher and defender of evolution. He made some rather astonishing claims that I just couldn't let go unchallenged. So I put pen to paper myself and formulated the following reply which was printed in the Tribune in September of 2000. ____________________ Dear Editor, Last week noted philosopher Michael Ruse, a self-confessed “enthusiastic evo
Post a Comment
Read more

By Doug Enick - January 23, 2009
Whatever greatness belongs to Calvin is in no doubt due (humanly speaking) to the fact that he was standing on the shoulders of giants. He was particularly fond of Augustine among the ancient fathers of the church. Among those in his own day, he thought very highly of Martin Luther. Luther was his elder by nearly 26 years and was mightily used of God to begin the work of Reformation. The two never met in person, but Calvin gladly acknowledged his indebtedness to him and expressed his appreciation for Luther's work a number of times. "It was a great miracle of God," he said, "that Luther and those who worked with him at the beginning in restoring the pure truth were able to emerge from it little by little." He also stated that, even if Doctor Martin should call him a devil, he would "nevertheless hold him in such honor [and] acknowledge him to be a distinguished servant of God."
Post a Comment
Read more 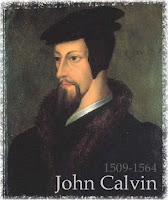 John Calvin was born on July 10, 1509, in Noyon, a small town about fifty miles northeast of Paris. He had two brothers and two sisters. His father, Gerard, intended that he should enter the priesthood, and to that end enrolled him in the College de Montaigu in Paris (1521), where he received a classical education. He later studied at Orleans, Bourges, and Basle. He received training in Hebrew, Greek, and Latin and earned the equivalent of a master's degree. Calvin's father persuaded him to abandon his pursuit of the priesthood in favor of a more profitable career in law. He studied under some of the most able teachers, not only of France, but of all Europe. His legal training came in especially handy when he moved to Geneva and advised that city's council as they moved toward a republican form of government. Had it been left up to him, Calvin would have chosen the quiet life of a scholar over the active life of a pastor, preacher, and reformer. His first publishing ven
Post a Comment
Read more

By Doug Enick - January 23, 2009
Thanks to Allison Reed for sending me the following link. Pretty funny! http://www.thedailyshow.com/video/index.jhtml?videoId=216538&title=changefest-09-obamas-inaugural
Post a Comment
Read more

By Doug Enick - January 20, 2009
We would not be far from the mark to say that the primal sin that lies at the root of all sin, is that self-will which refuses to be content with limitations on our (supposed) freedom. Jude tells us of certain angels "who did not stay within their own position of authority" and suffered the consequences of their overreaching (Jude 6). This was also the sin of Adam and Eve. They were not content to be subordinate to God, even though they were created in his image and were placed at the head of his creation. They just had to have more. They had to be "like" (equal to) God. They had to know good and evil for themselves, rather than let God define their moral world for them. This mother of all sins carries over into marriage. One of the principle temptations women must resist is a desire to rule over their husbands, contrary to the created order (Gen. 3:16). Consider Korah. He had high privileges as a Levite, but not content with these, he coveted the priesthood als
Post a Comment
Read more

By Doug Enick - January 15, 2009
I've just finished reading a very interesting, and a very troubling book: Who Killed the Constitution : The Fate of American Liberty from World War I to George W. Bush , by Thomas E. Woods, Jr. and Kevin R. C. Gutzman. Many Americans worry that the Constitution is dying. Leading the chorus are those critics, mostly on the Right, who decry activist judges for rendering the Constitution more and more irrelevant with their twisted decisions, which substitute their political preferences for the nation's highest law. In recent years other voices, mostly from the Left, have joined in, deploring President George W. Bush and his administration's supposedly unprecedented attacks on the Constitution. We have bad news for both sets of critics: the Constitution is already dead. It died a long time ago. (From the introduction) The authors go on to examine "the dirty dozen," twelve of the most eggregious examples of the federal government's disregard of constitutional a
Post a Comment
Read more

By Doug Enick - January 13, 2009
Have you ever noticed the correspondence between the creative acts of God performed on the first three days and those performed on the last three days? 1—Light................. 4—Sun, moon, and stars 2—Sea and sky..........5—Fish and fowl 3—Earth and plants.... 6—Land animals and man There are a lot of interesting things like this in the Bible.
Post a Comment
Read more

And all this without a computer

By Doug Enick - January 06, 2009
Calvin's work was quite extraordinary not only in terms of the impact it's had on subsequent generations, but also in the sheer amount of ink he devoted to paper. His collected works fill fifty-nine volumes and include tracts, pamphlets, sermons, catechisms, church manuals, biblical commentaries, letters, a commentary on Seneca's De Clementia , and of course his magnum opus: The Institutes of the Christian Religion, which has gained for him a lasting reputation as one of the Church's greatest theologians. His genius is recognized by friend and foe alike. His prodigious output is all the more remarkable given his rather short life (July 10, 1509 - May, 27, 1563). What might he have done had he lived another 20 years?
Post a Comment
Read more

More On the Creation of the World

By Doug Enick - January 06, 2009
If you've ever read Hesiod's Theogony (Greek) or the Epic of Gilgamesh (Babylonian) or are familiar with other ancient accounts of the gods and the creation of the world, you know just how stark the differences are between them and the creation account in Genesis. All kinds of wondrous stories about the creation of the world were wide-spread throughout the lands of the East, and many of them assumed a literary form in epic poems or other compositions… They began, as a rule with a Theogony, that is, with the origin of the gods, the genealogy of the deities who preceded the birth of the world and mankind; and they told of the antagonism between this god and that god, of frictions that arose from these clashes of will, and of mighty wars that were waged by the gods. They connected the genesis of the world with the genesis of the gods and with the hostilities and wars between them; and they identified the different parts of the universe with given deities or with certain parts of t
Post a Comment
Read more

By Doug Enick - January 06, 2009
In the beginning, God created the heavens and the earth (Gen. 1:1). If we get this right, we avoid a great many errors. This simple sentence denies atheism; for it assumes the being of God. It denies polytheism, and, among its various forms, the doctrine of two eternal principles, the one good and the other evil; for it confesses the One Eternal Creator. It denies materialism; for it asserts the creation of matter. It denies pantheism; for it assumes the existence of God before all things, and apart from them. It denies fatalism; for it involves the freedom of the Eternal Being. (James Murphy, Barnes Notes , vol. 1, p. 30)
Post a Comment
Read more

An Anniversary to Celebrate 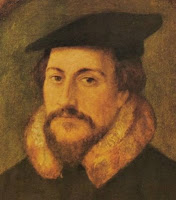 The new year marks the 500th anniversary of the birth of that brilliant but controversial man, John Calvin, whose name has taken its place among the isms that fill the vocabulary of systematic theologians. It might not be too much of an overstatement to say that Calvin has been the most misunderstood, the most misrepresented, and the most maligned figure of Protestant Christianity. This is unfortunate because his contribution to Western Civilization has been enormous, not only in terms of systematizing the theology of the Reformation and developing the science of biblical interpretation, but also in terms of his impact on the wider culture. One need not subscribe to the particulars of Calvinism to appreciate his genius and to be thankful for his lasting legacy. Many of the the blessings of Western Civilization that we often take for granted are attributable to the work of Calvin. During the course of 2009, I'll be reading a number of things by and about Calvin, and I'll be p
Post a Comment
Read more

By Doug Enick - January 02, 2009
As we start a new year I thought I might add a (hopefully) regular feature to my blog, namely, a few comments on various passages of Scripture. Last year, as I have done several times since my late teens, I read through the entire Bible, taking 3-4 chapters a day. This year I plan to devote considerable attention to the study of the books of Moses (Genesis, Exodus, Leviticus, Numbers, and Deuteronomy), and I will post a few thoughts along the way. The books of Moses are called the books of Moses because...well...they were written by Moses (for the most part). There is some evidence of a later editorial hand at work as well (e.g., the account of Moses death and burial, Deut. 34), but the higher critical theories that deny Mosaic authorship are unconvincing. The prophets and the apostles frequently recognize Moses as the author ( e.g. , Dan. 9:11-13; Mal. 4:4; Acts 3:22; Rom. 10:5), as does Jesus himself ( e.g. , Matt. 8:4; 19:8; Mk. 7:10; 12:26; Lk. 24:44; Jn. 5:46). The books are oft
Post a Comment
Read more
More posts