Showing posts from May, 2019
Show all

The Absurdity of Killing Jews for Jesus 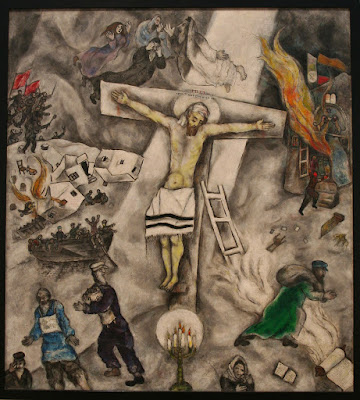 Marc Chagall's "White Crucifixion" (1938) depicts both our Lord's death and the suffering of the Jews through the ages since. How can anyone who has ever read the Bible— and claims to believe it —be anti-Semitic, like the wicked young man involved in the synagogue shooting last week in Poway, California?   How much we Gentile believers in Israel’s Messiah owe to the Jews!   How can we not love them and be grateful for them?   Except for the Gospel of Luke and the book of Acts, the entire Bible has come to us through Jewish hands.   Our Lord Jesus, who said, “Salvation is from the Jews” (Jn. 4:22), was himself (of course!) a Jew.   All the apostles were Jews.   Most of the early believers were Jews.   Our Lord’s brother, Jacob (James), said there were many myriads of Jewish Christians in his day (Acts 21:20).   In the later chapters of his letter to the Romans, Paul tells Gentile Christians to bend over backwards in consideration for the Jews, and so live a
Post a Comment
Read more
More posts