Showing posts from August, 2018
Show all

The ongoing ministry of Christ 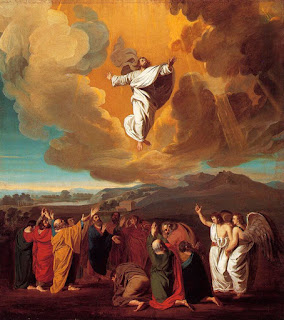 The full name of the book of Acts is The Acts of the Apostles .   Luke himself didn’t give this name to the book, of course, but this is the name by which it came to be known in the early church. [1]   The name is indicative of the subject matter, although it’s a bit misleading because there is very little information given about the ministry of any of the other apostles except Peter and Paul—and Paul wasn’t even one of the original twelve. Because of the prominent role played by the Holy Spirit, some have suggested the book should be called The Acts of the Holy Spirit . [2]   There is some merit to this.  Clearly the Holy Spirit plays a vital role in the book.   I think the book might best be called The Continuing Acts of Jesus Christ . [3]   Why?   Because in it we find Jesus continuing the ministry he began while he was on earth.   This is how Luke himself viewed the situation.   In the first book, O Theophilus, I have dealt with all that Jesus began to do and teach
Post a Comment
Read more

Keeping up with the Herodians 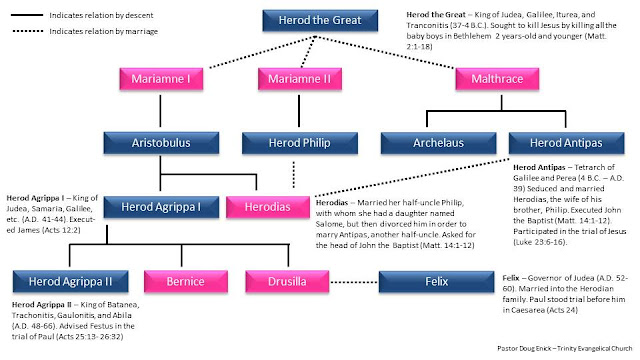 When reading the New Testament, it can be difficult to follow who’s who in the family of Herod.  Here’s a brief overview of the Herodian dynasty, at least of those members who play a prominent role in the Gospels and the book of Acts. The most famous member of the dynasty is its founder, Herod the Great.  He’s not called “Great” because he was good or wise or just, but because he was an ambitious builder.  The ruins of his many projects can still be seen all over Israel.  It was Herod the Great who attempted to put Jesus to death as a baby by ordering all the male children in Bethlehem under two years of age to be killed. He died a few months after our Lord was born and his dominion was divided among three of his sons.  He had more than three, but these are they who inherited his kingdom:   Archelaus and Herod Antipas, brothers from the same mother (Malthrace), and Herod Philip, a brother from another mother (Mariamne II). Archelaus is mentioned in Scripture just in
Post a Comment
Read more
More posts