Showing posts from November, 2008
Show all

Learning (even more) from the Pilgrims

By Doug Enick - November 26, 2008
As a follow up to the previous post I should point out that the Pilgrims abandoned their forced experiment in communism only by degrees. When they gave each family a plot of land to farm and to enjoy the fruits thereof, they did not give the land for a perpetual holding, but rotated each parcel of land by yearly lot. This naturally caused problems. In order that they might raise their crops to better advantage, they made suit to the Governor to have some land apportioned for permanent holdings, and not by yearly lot, whereby the plots which the more industrious had brought under good culture one year would change hands the next, and others would reap the advantage; with the result that the manuring and culture of the land were neglected. It was well considered, and their request was granted. Every person was given one acre of land, for them and theirs, and they were to have no more till the seven years had expired. The move had the intended effect and the colony prospered all the mor
3 comments
Read more

Learning from the Pilgrims

By Doug Enick - November 26, 2008
One of the books I had my students read this semester was Of Plymouth Plantation by William Bradford, who was elected governor of Plymouth Colony in 1621 and continued to serve in that position for more than 30 years. There is much we can learn from the Pilgrims, and not only about the value of courage, hard work, and faith in God. There's a valuable economic lesson we can learn as well. By the terms of their contract with the London Company who put up a large portion of the funds to establish the colony, they were required to hold their lands and produce in common. This was an early experiment in communism. And how did things go, you ask? Here are Bradford's words: So they began to think how they might raise as much corn as they could, and obtain a better crop than they had done, that they might not still thus languish in misery. At length, after much debate of things, the Governor (with the advice of the chiefest amongst them) gave way that they should set corn every ma
Post a Comment
Read more

By Doug Enick - November 22, 2008
It’s not just in our own days that people have had a low opinion of lawyers. In his biting satire of early 18th century English life, Jonathan Swift has Gulliver tell his hosts in the land of the Houyhnhnms: I said, “there was a society of men among us, bred up from their youth in the art of proving, by words multiplied for the purpose, that white is black, and black is white, according as they are paid. To this society all the rest of the people are slaves. For example, if my neighbour has a mind to my cow, he has a lawyer to prove that he ought to have my cow from me. I must then hire another to defend my right, it being against all rules of law that any man should be allowed to speak for himself. Now, in this case, I, who am the right owner, lie under two great disadvantages: first, my lawyer, being practised almost from his cradle in defending falsehood, is quite out of his element when he would be an advocate for justice, which is an unnatural office he always attempts with great
Post a Comment
Read more

By Doug Enick - November 11, 2008
I always enjoy reading Mark Steyn. If you haven't done so yet, you ought to read his " Center-Right America Lurches Further Left ."
Post a Comment
Read more 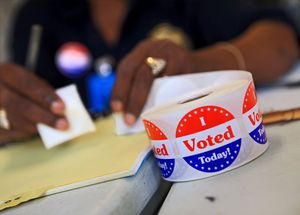 Here are a few things to remember regardless of whether or not the presidential election went the way you thought it should. First, the outcome is not the absolute disaster that many people think it is. God remains sovereign over all the affairs of men, even of powerful political figures. “The king’s heart is a stream of water in the hand of the Lord; he turns it wherever he will” (Prov. 21:1). God is able to prevent whatever evil or whatever folly a leader may intend to do. “He frustrates the devices of the crafty, so that their hands achieve no success” (Job 5:12). And even that evil and folly which he permits them to achieve, he is able to turn to the good (Gen. 50:20). Second, the outcome is not the unrivalled blessing that others imagine it to be. Politicians are notoriously pitiful saviors. The best of them too often leave behind a trail of broken promises, dashed hopes, unfulfilled expectations, and betrayed trusts. To build one’s hopes on getting the “right” man in office i
1 comment
Read more
More posts