Showing posts from April, 2013
Show all

Joseph Story on the Second Amendment 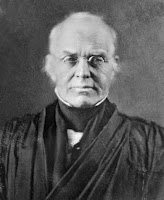 In several previous posts I have referred to and quoted the work of Joseph Story, an Associate Justice of the United States Supreme Court (1811-1845), a friend of several of the Founding Fathers, and the author of  Commentaries on the Constitution of the United States  (1833), a work that set the benchmark for interpreting the Constitution for the rest of the 19th century.  It is often interesting to consult the views of those who lived at or near the time of the Founding of the country to see how they compare with politicians and pundits plying their trade today. Here is Story’s commentary on the Second Amendment: § 1889.  The next amendment is: “A well regulated militia being necessary to the security of a free state, the right of the people to keep and bear arms shall not be infringed.” § 1890.  The importance of this article will scarcely be doubted by any persons, who have duly reflected upon the subject. The militia is the natural defence [ sic ] of a free country again
2 comments
Read more

On the Sometimes Touchy Subject of Drinking Wine

Wherein (as a Puritan of yore might have put it) the divine goodness in providing man with that which gladdens the heart is displayed and vindicated, and sundry warnings concerning the misuse of God’s good gifts are given, together with a few recommendations for the lawful enjoying of the same One of the things we ought to admire most in God is his habit of taking what man intends for evil and using it instead for good (Gen. 45:5-8; 50:20; Rom. 8:28). On the other hand, one of the things we should most lament in man is his habit of doing just the opposite —taking what God intends for good and using it for evil (Ezek. 16:17-21; Hos. 2:8). Examples abound, but I will limit myself to three. “He satisfies your hearts with food and gladness” (Acts 14:17) If anyone wishes to have proof of God’s goodness, let him look no further than his own taste buds. Seriously. God has made us in such a way that we must eat in order to maintain our health and strength. This might have been a
2 comments
Read more
More posts