Showing posts from August, 2008
Show all

By Doug Enick - August 30, 2008
I haven't posted anything in a while because I've had a good bit of trouble with my internet connection. I have to borrow a computer in order to use the internet and it's terribly inconventient to do much online except for the barest necessities. Hope to be back soon.
Post a Comment
Read more

All God's Creatures have Fun! 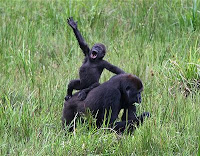 I ran accross a story on Fox News about the discovery of far more gorillas in the Republic of Congo than researchers previously thought lived there. This picture accompanied the story. I was amused.
Post a Comment
Read more

By Doug Enick - August 04, 2008
Flew vs. Dawkins August 4, 2008 A while back I wrote a couple of pieces about the so-called New Atheism. The New Atheism is simply the old atheism with an attitude. One of the leading lights of the New Atheism is Richard Dawkins, author of The God Delusion , who argues ad nauseum that belief in God is for little children and fools. Reasonable men (like Dawkins, of course) believe in neither god nor Santa Claus—nor for that matter the tooth fairy or the Easter bunny. People who actually use their minds (like him), educated people (like him), reasonable people (like him), embrace the obvious truth that god does not exist. Ah, but what is a new atheist to do when another prominent atheist, who says his goal is to go wherever the argument leads him, gives up his atheism? This is the pickle that Dawkins finds himself in. Not only must he explain away Anthony Flew’s giving up the atheist faith, he must answer Flew’s charge that he (Dawkins) is nothing but a blow hard “secular bigot.” You
Post a Comment
Read more

By Doug Enick - August 04, 2008
Last Friday Barack Obama announced his Emergency Economic Plan. “What’s that ,” you say? Glad you asked. The short answer is—it’s a political stunt to buy the votes of the economically naïve. The plan calls for “Forcing big oil companies to take a reasonable share of their record breaking windfall profits and use it to help struggling families with direct relief worth $500 for an individual and $1,000 for a married couple.” (For the full text of the plan click here .) Just how would “big oil companies” be “forced” to do this? Through taxing the socks off them, of course. Have you ever noticed how big business is always the villain in the economic policies of liberals? They always seem to assume that big businesses got so big because they cheated. They didn’t play by the rules. They had an unfair advantage. In reality big businesses became big because they provided quality goods and services for the consumer at better prices than the other guys. This is simply the way the competit
Post a Comment
Read more
More posts