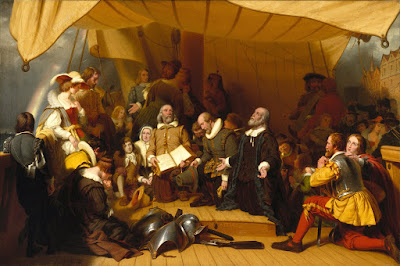 Kate Zernike, writing for the New York Times, finds fault with what she calls “one common telling” of the story of the Pilgrims.  That telling – she also calls it an “interpretation” of their experience – has it that they conducted a brief experiment in socialism.  The problem for Zernike is that it’s not simply an interpretation or one common telling; it’s what no less an authority than William Bradford documents in Of Plymouth Plantation.  Bradford, of course, was governor of Plymouth Colony for 30 years.

It was not the Pilgrims who wanted a communal plantation; it was required by the terms of their agreement with the London Company that financed the colony.  (He who pays the piper calls the tunes, as they say.)  It did not go well.  Here is Bradford in his own words: 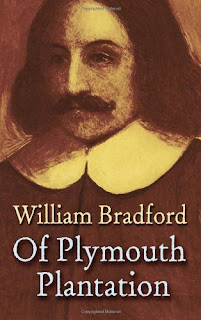 “They began to consider how to raise more corn, and obtain a better crop than they had done, so that they might not continue to endure the misery of want.  At length after much debate, the Governor with the advice of the chief among them, allowed each man to plant other corn for his own household, and to trust to themselves for that; in all other things to go on in the general way as before.  So every family was assigned a parcel of land, according to the proportion of their number with that in view…  This was very successful.  It made all hands very industrious, so that much more corn was planted than otherwise would have been by any means the Governor or any other could devise, and saved him a great deal of trouble, and gave far better satisfaction.”[1]

They were reluctant to go against the terms of their charter, but they deemed it necessary for their survival.  The stunning turnaround in production led Bradford to comment on the benefits of private property and the dangers of common ownership, especially in terms of the personal incentives and disincentives each system creates.

“The failure of this experiment of communal service, which was tried for several years, and by good and honest men proves the emptiness of the theory of Plato and other ancients, applauded by some of later times, - that the taking away of private property, and the possession of it in community, by a commonwealth, would make a state happy and flourishing; as if they were wiser than God.  For in this instance, community of property (so far as it went) was found to breed much confusion and discontent, and retard much employment which would have been to the general benefit and comfort. For the young men who were most able and fit for service objected to being forced to spend their time and strength in working for other men’s wives and children, without any recompense.  The strong man or the resourceful man had no more share of food, clothes, etc., than the weak man who was not able to do a quarter the other could.  This was thought injustice.  The aged and graver men, who were ranked and equalized in labour, food, clothes, etc., with the humbler and younger ones, thought it some indignity and disrespect to them.  As for men’s wives who were obliged to do service for other men, such as cooking, washing their clothes, etc., they considered it a kind of slavery, and many husbands would not brook [tolerate] it.  This feature of it would have been worse still, if they had been men of an inferior class.  If (it was an thought) all were to share alike, and all were to do alike, then all were on an equality throughout, and one was as good as another, and so, if it did not actually abolish those very relations which God himself has set among men, it did at least greatly diminish the mutual respect that is so important should be preserved amongst them.  Let none argue that this is due to human failing, rather than to the communistic plan of life in itself.  I answer, seeing that all men have this failing in them, that God in His wisdom saw that another plan of life was fitter for them.[2]

The colony abandoned its experiment in communism only by degrees.  When each family was given a plot of land to farm and given the exclusive right to enjoy its fruits, the plots were not given as perpetual holdings, but distributed yearly by lot.  Each year the plots changed hands.  But this caused another problem with personal incentives.  Why go to so much trouble to nurture the land I work this year when I'll be farming a different plot of ground next year?

“In order that they might raise their crops to better advantage, they made suit to the Governor to have some land apportioned for permanent holdings, and not by yearly lot, whereby the plots which the more industrious had brought under good culture one year would change hands the next, and others would reap the advantage; with the result that the manuring and culture of the land were neglected.  It was well considered, and their request was granted.  Every person was given one acre of land, for them and theirs, and they were to have no more till the seven years had expired.[3]

The move had the intended effect and the colony prospered all the more.

We can learn many valuable lessons from the Pilgrims, not the least of which is the value of private property and the dangers of socialism.