As we celebrate Thanksgiving this week, we would do well to consider just how vital giving thanks is to the worship of God.  We get a sense of its importance when we read this devastating indictment from the pen of the apostle Paul:

For the wrath of God is revealed from heaven against all ungodliness and unrighteousness of men, who by their unrighteousness suppress the truth.  For what can be known about God is plain to them, because God has shown it to them.  For his invisible attributes, namely, his eternal power and divine nature, have been clearly perceived, ever since the creation of the world, in the things that have been made.  So they are without excuse.  For although they knew God, they did not honor him as God or give thanks to him, but they became futile in their thinking, and their foolish hearts were darkened (Rom. 1:18-21).

Here we find the root of all sin – a failure to honor God as God (i.e., as the Lord of all) and, consequently, a failure to give him the thanks he is due.  The result of this double failure is to become futile in thought and dark in heart.  “They became futile in their thinking, and their foolish hearts were darkened.”

Is this not the story of our first parents in a nutshell?  God had said, “You shall not eat of the tree of the knowledge of good and evil, for in the day you eat of it you will surely die.”  The serpent countered, “You will not surely die, but will instead gain wisdom and become like God, knowing good and evil.”

If they had honored the Lord as God, they would have taken him at his word.  Instead, Eve thought, “The word of the Almighty and Eternal God – the Maker of heaven and earth – is not enough for me.  I must verify his word by my own experience.”  That’s when the battle was lost.  And of course, Adam watched the whole thing unfold and did nothing to stop it, but rather joined her in her disregard of God’s honor. 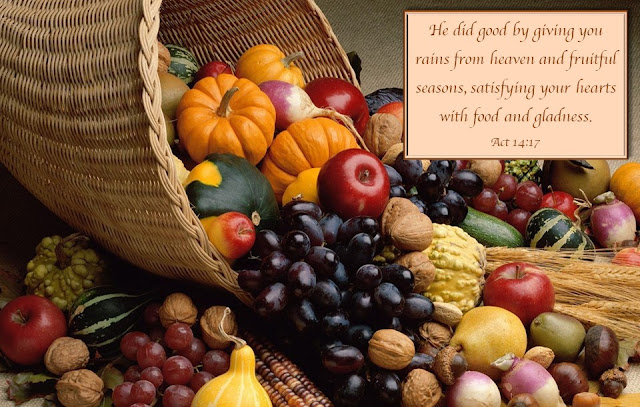 A vital aspect of that disregard was their failure to give him thanks.  Think about their original condition.  They lived in a world of God’s own making, filled with every delightful thing.  He placed them in paradise (Eden means pleasure).  He told them they might eat from every tree of the garden, except one.  It’s important that we grasp this.  Only one tree was prohibited.  There were apple trees and banana trees and peach trees, coconut, pomegranate, and pecan trees – every fruit and nut bearing tree you can name, and probably several more that have long since become extinct.  And what do Adam and Eve do?  They obsess over the one tree that was forbidden to them.  They didn’t thank God for all that he had given them but instead grumbled and complained over the one and only thing he withheld.

And we tend to do the same thing, do we not?  We focus on what we wish we had instead of what we do have; and so we become restless and discontent, in a word, ungrateful.

There is wise counsel in the refrain of an old hymn.

This is the antidote for what ails us.  All the more so when we consider that we have received these blessings quite apart from our deserving them.  We have received them because the Lord is the “overflowing fountain of all good.”[1]

Let us strive not only to be content with what we have (1 Tim. 6:6, 8) but genuinely grateful, for as James puts it, “Every good and perfect gift is from above, coming down from the Father of lights” (Jas. 1:17).