JESTER NEWS— In a move that was widely expected among court-watchers, the Ninth District Court of Appeals ruled yesterday that reading the Founding Fathers in public schools and appealing to them in legal arguments is unconstitutional. “We have been watching this court for sometime now,” said Gary Shyster, a lawyer with the ACLU, who filed a brief in the case. “We knew that it was only a matter of time.” 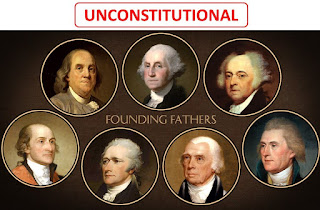 Christa Phobe, executive director of Hysterical Americans United for the Removal of all Traces of a Christian Past, was elated with the court’s decision. “We knew we had a strong case since the court had previously ruled against the posting of the Declaration of Independence in government buildings because of its appeal to ‘the Creator.’ If the Declaration had to go, we knew the rest of the Founding Fathers’ writings couldn’t be far behind.”

The case originated when Ima Bigot of Berkeley, California objected to an assignment her son was given in his high school government class. He was to play the part of our first president and deliver Washington’s Farewell Address to the class. “It’s offensive from beginning to end,” Ms. Bigot said. “I can’t believe they would subject our children to such blatant religious indoctrination.”

The portion of Washington’s Address which was found to be especially troublesome is found near its midpoint:  “Of all the dispositions and habits, which lead to political prosperity, Religion, and Morality are indispensable supports. In vain would that man claim the tribute of Patriotism, who should labor to subvert these great pillars of human happiness.” “Can you believe this guy?” asked Bigot. “What does Washington know about patriotism?  All this God and country stuff doesn’t mix. It’s just un-American.”

Writing for the majority, circuit judge Stephen Reinhardt said, “The members of this court have long held that to appeal to the Founding Fathers on legal questions is to foist a religious point of view on matters of state, and of course we can’t have that.”

The ACLU hailed the decision. “We see this as the huge step toward our ultimate goal, which is to see the court rule the Constitution unconstitutional,” Shyster said.
ACLU Constitution Jester news Satire