Christian Fools and their Folly

By Doug Enick - May 19, 2011
Perhaps you have heard that this Saturday...as in two days from now...the world as we know it is going to come to an end. So says one Harold Camping, president of Family Radio. More precisely, the rapture is supposed to occur on Saturday. The following five months will witness the wrath of God being poured out in judgment upon those left behind. The full end of all things will come later this year on October 21. 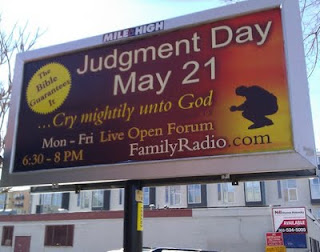 We've been through all this silliness before. Previously Mr. Camping said these things would happen in 1994. Is it necessary to say he was wrong - painfully, shamefully, embarrassingly wrong? Or, depending where you stand, laughably wrong!

Of course he had to admit as much the first time around...sort of. September 6, 1994 (the original prediction) was not the day of the rapture after all. But as it turns out, it was still a very significant day in God's timetable, he assures us. It was the beginning of the Great Tribulation. The end would come in 2008.

Oops! That's not right either. No worries, though. Further calculations have shown that the Great Tribulation actually began in 1988 (40 years after Israel became a nation). The 2nd Jubilee (the Latter Rain) began in 1994, and the end will come in 2011.

Confused? Me too. But Camping is even more so.

I'm not sure which is more surprising, that someone could so obviously and so thoroughly twist the Scriptures like Camping does, or that so many people think he's right. Incredibly, his following this time around is even larger than before. Maybe it's because he assures us that no less an authority than the Bible itself backs him up. "The Bible guarantees it," he says. Or perhaps it's because the world is filled with undiscerning Christians who simply don't know how to read the Bible. I don't mean they are literally illiterate, as in can't read. I mean they don't know how to handle the Bible, how to interpret it. They read it as if it's written in some kind of mystical code that only the most spiritually astute can decipher.

His interpretations are a wonder to behold. Really. I wonder how in the world he can have such a disregard of context. I wonder how he can join together passages that have nothing to do with one another. I wonder how he can ignore the plain meaning of the text and arrive at it's underlying "spiritual" meaning. I wonder how he can pull random numbers from this verse and that and say they represent the number of years in the Lord's timetable of end time events.

I would like to think that when May 21 comes and goes and the rapture doesn't take place, Camping will forsake his folly and apologize to the world. But I'm sure he'll have an explanation ready at hand. He'll recalculate and be out with another date sometime soon.

And what will become of those who follow him? God only knows. Some, who have staked the truth of the Christian faith on the "truth" of Camping's predictions, may forsake the faith altogether. Some, Lord willing, will reject the whole endeavor of end times speculation and join a faithful church. But there will be a few, no doubt - true believers to the bitter end - who will follow Camping whithersoever he goes.
State of the Church

I appreciate your thoughts on this. I hadn't heard about Camping until a week or so ago.

I sure wonder how Camping will feel on Sunday. I agree with you -- surely he has a plan of what he will say after May 21st comes and goes. I guess he must be emotionally prepared for the rapture not happening, as he has been in this situation before! I wonder what he will spend his day doing on Saturday? Perhaps this time, afterwards, he will choose a date far enough away that he won't have the chance to be around to be proved wrong.